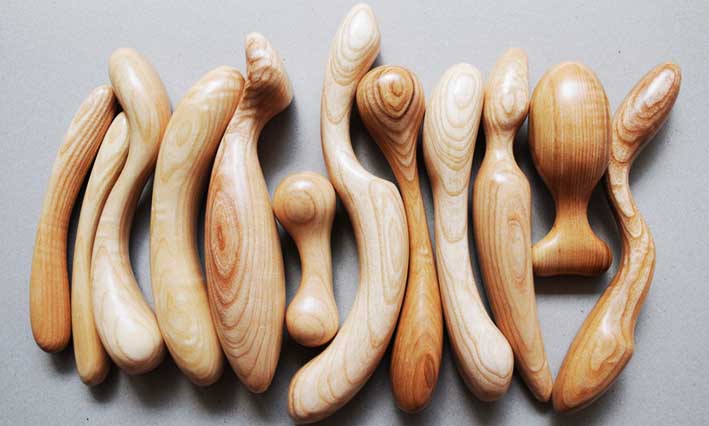 Last week, Marica started learning about sex toys. It is interesting how I thought getting acclimated to sex toys would be better than teaching her how to walk like a girl or walk in heels. Sex toys are an enormous part of a sissy’s life and Marica would be no different.

This was the first morning I had Marica come over wearing panties instead of putting them on for me once she was here. When we got settled on the couch, I asked her how she felt doing this for me. She said when I had given her the assignment on Tuesday (via email), she was “nerviosa,” but also “emocionada” (excited). (And yes, I did have to keep correcting her gender in Spanish. She kept speaking as if she was male; she is not to me anymore!)

I asked her how excited and she blushed a bit and said her clitty (pronounced “Klee-tee” with her accent) did get hard. I asked how her clitty was right now and she said, “Dura” (hard).

When she came over this morning, she and I were alone for a couple of hours and we sat on the couch as she told me her thoughts over the past week. We had touched base several times in text and email, but there is nothing like face to face.

She was still quite taken aback by the pussy/anal sex toys, but I reassured her, she would be introduced to them slowly and she really would enjoy it. I have not met a sissy yet who did not like pussy play. I think it is pretty inherent in sissies, right? 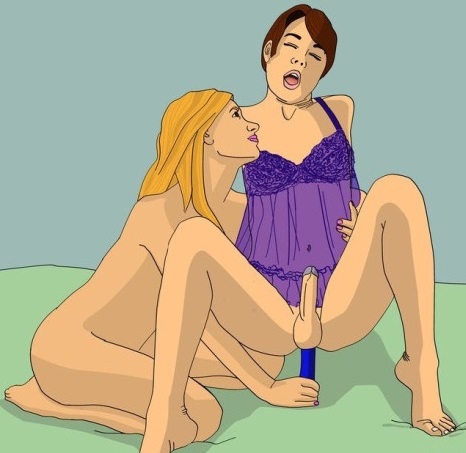 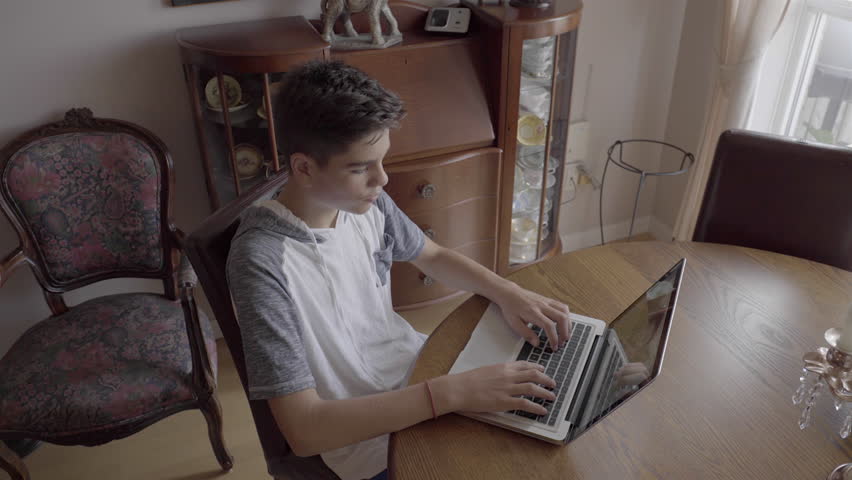 And being a Sadist, whose to say I might not get a kick out of tormenting her nipples a bit. Juuuuussstttt a bit.

This would probably be the last time my girlfriends came en masse for awhile, my wanting to start working with Marica alone. But, once again, they brought toys from their own collections and their submissives’ toy stashes as well. Once again, cleaned meticulously, today Marica would be taught how to clean sexy toys properly at the end of the day.

CBT… Cock & Ball Torture… or Clitty & Berry Torture… is so delicious to articulate on a body. Even when it isn’t a major kink, just some minor tweaking of the berries can be so much fun.

This first sex toy is for adding weights to stretch the berries downward. I actually put this one on Marica and had a little cup that I added a couple of fish weights to so she could see how it worked. She did not find it terribly unpleasant. I noted that. 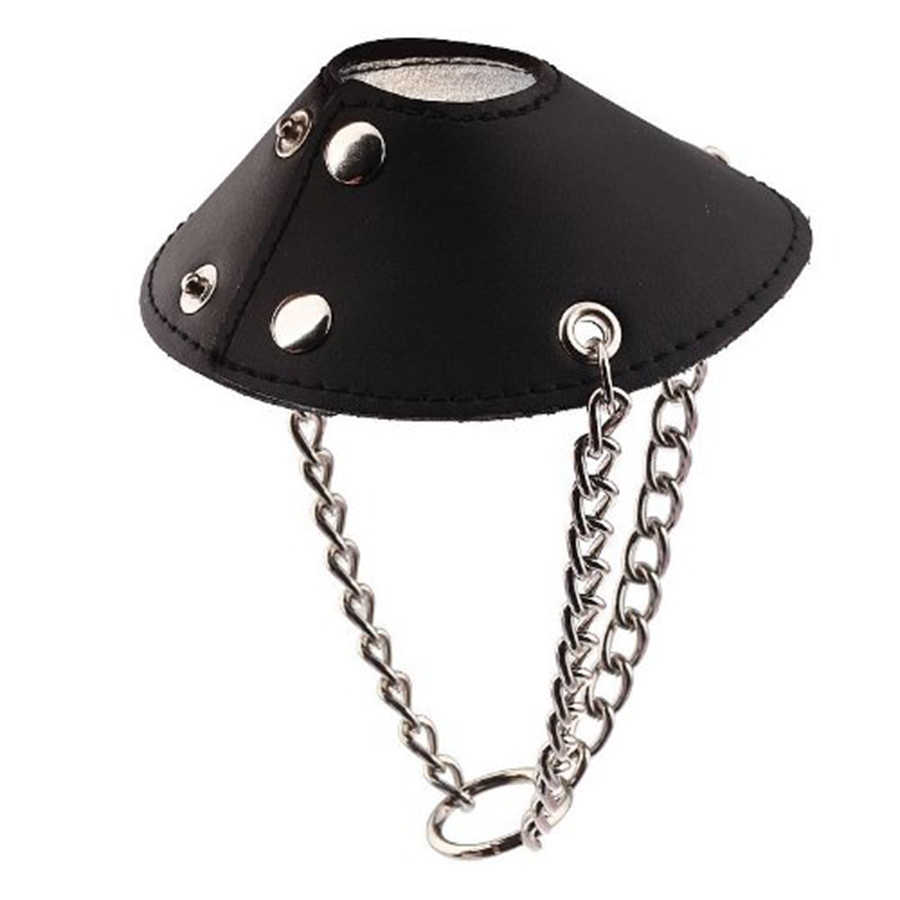 This next one is evil. (yum!) You put the berries inside and those pegs can be screwed into the berries inside the metal covers. The locks keep the girl from opening the ball squisher before the Dominant is ready. You can also add weights to this device. 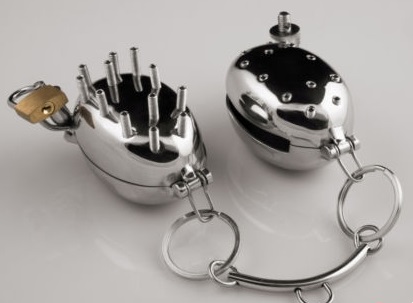 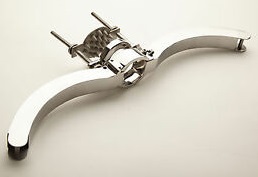 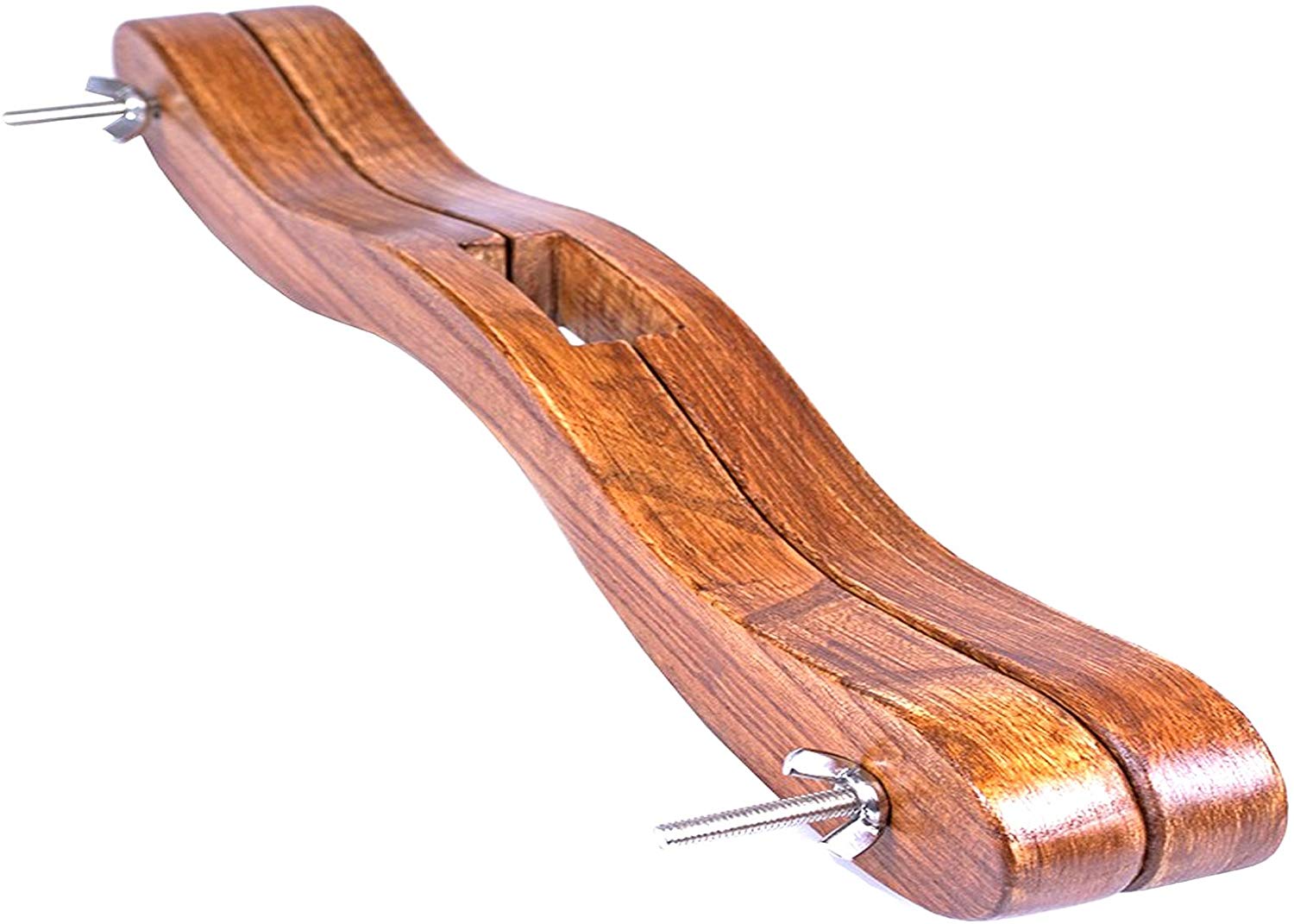 I have a special love of nipple torture… er, play. They are so easy to pleasure and turn that pleasure to pain with the twist of the wrist. Mmmm hmmm. Yummy.

Clothespins are the easiest to use and the easiest to keep handy where not many would have a clue what they are for. First I played with Marica’s nipples to see how sensitive they were. She looked so cute in her panties with my making her nipples hard… her clitty followed suit.

When I put the clothes pins on, she made a remark that made me laugh. “No me duele,” -this doesn’t hurt. I flicked one of the clothespins off her nipple and she yelped saying, “¡Eso me duele! – THAT hurt!” We all laughed and I told her to be careful what she said in the future. I let her know that clothes pins can also be used for CBT and explained a zipper, showed her the picture below, and then told her how much fun it is to take the clothes pins from berries to knees and what ripping the zipper off felt like. I loved watching her eyes widen in horror. (That sadistic side of me at play!) 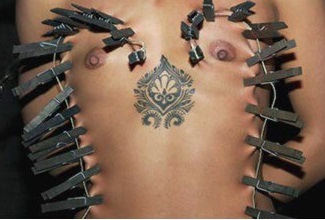 And in case you are wondering, I did NOT tell her about office supply clips. One nasty gadget at a time.

I then showed her standard nipple clamps. These first ones being the most benign with the rubber tips, even though they do have screws to tighten them. 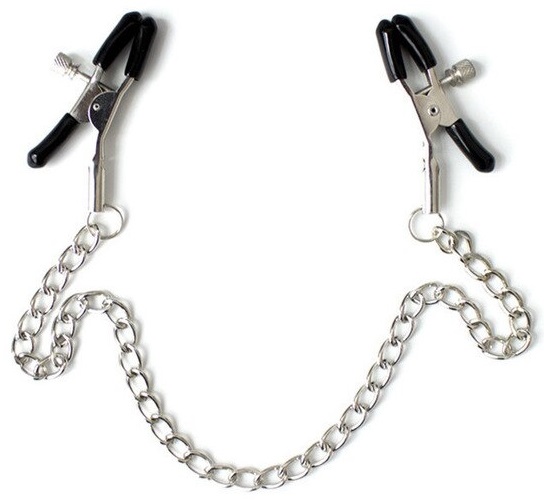 I love the next ones: Clover clamps. I find them extremely sensual looking, almost like art. And they are wicked painful after a few minutes.

If you have never done nipple play with clamps before, the worst part is not putting them on, but taking them off. The blood rushes back to the “injured” area and it is a searing pain many times worse than clamping them on your nipples. Yeah, baby! 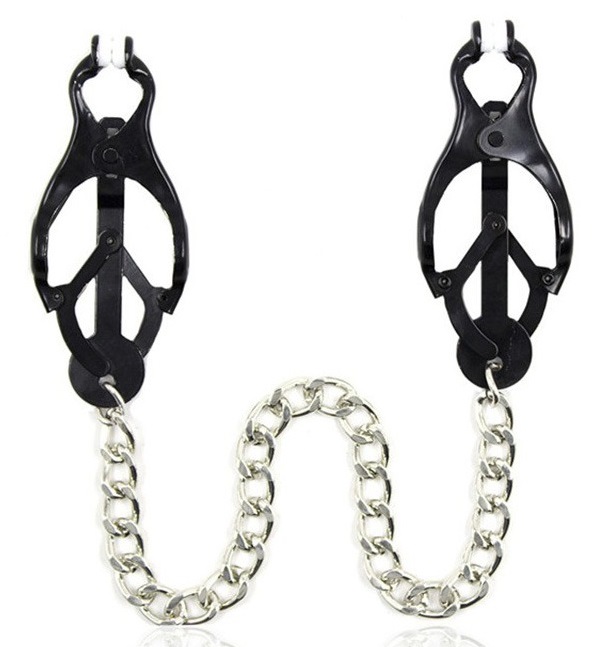 Bitey to Bitier! These alligator claps are wicked cruel. In the height of my submissive pain slut days, these were my Dom’s preference and I grew to love them. Today, I think I would balk. Marica was horrified seeing them and flicking her finger on the teeth. 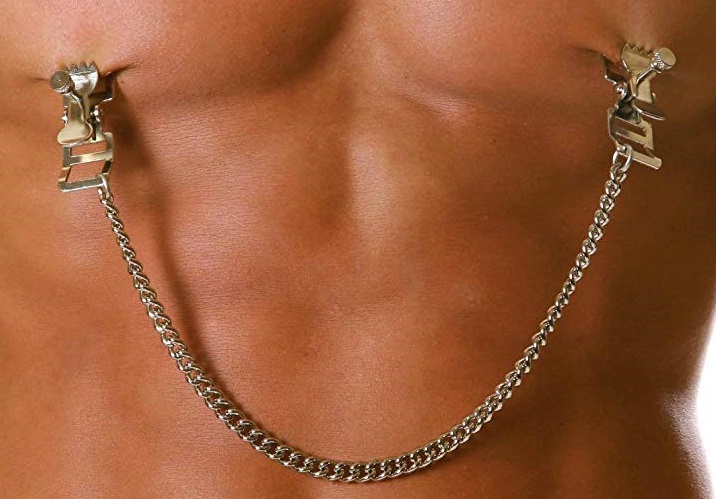 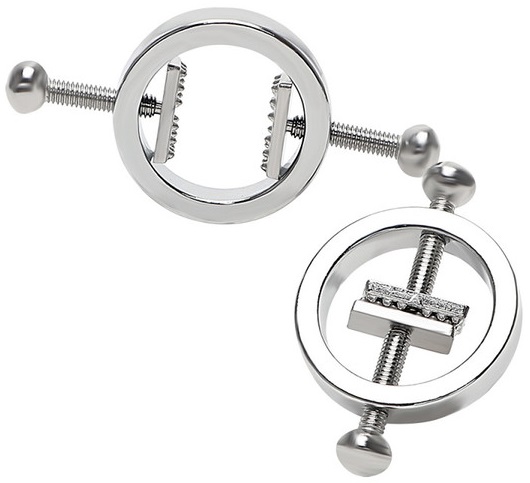 I mainly wanted to introduce glass/pyrex sex toys to talk about temperature play. We’d put a couple of the toys in the freezer and then one of my friends warmed up one under the faucet and brought it to Marica. She could immediately see the benefit of playing with temperature. I will save wax play for another day.

I also wanted Marica to see that sex toys can be art! These below are all so so beautiful. 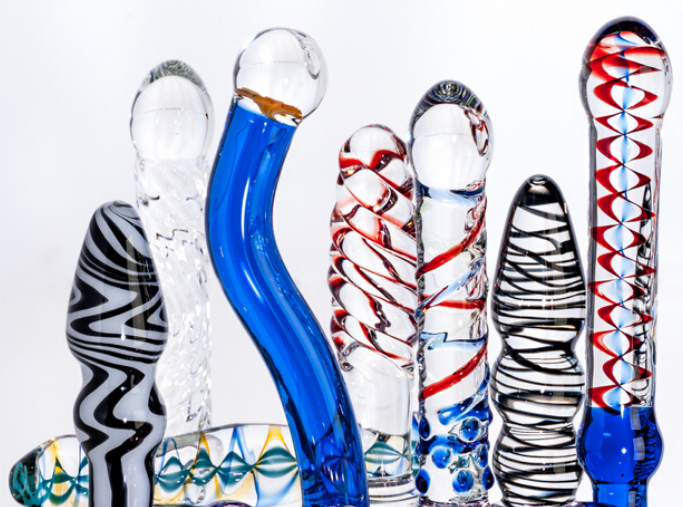 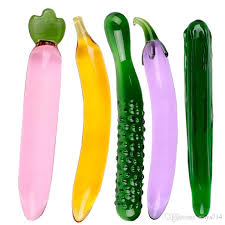 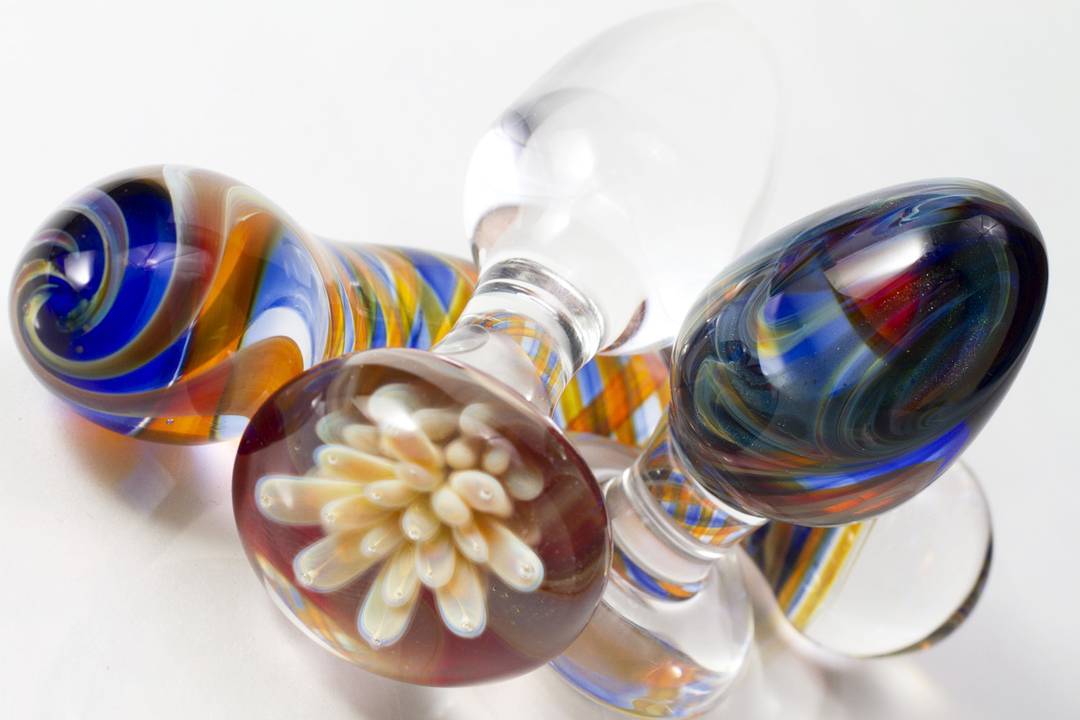 Lastly, we moved to sounds. Sounding is serious clitty play, reserved for the most experienced out there. I had mentioned sounding before, but we gathered a couple of sets to show her this week.

I explained what one does with the sounds (please study up/talk to an experienced Mistress before trying this yourself!) and Marica thought I was kidding. Of course I was not. 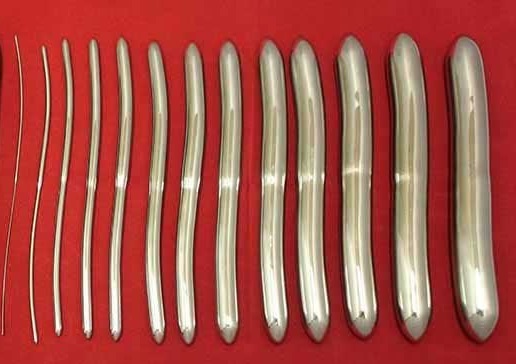 I did tell her that this was something I really loved and if we began doing clitty games, this would be a consideration near the end of the year. She looked at me soberly, but nodded slightly. She  was quite intrigued when I told her many people describe sounding as getting their dick fucked. Mmmmm 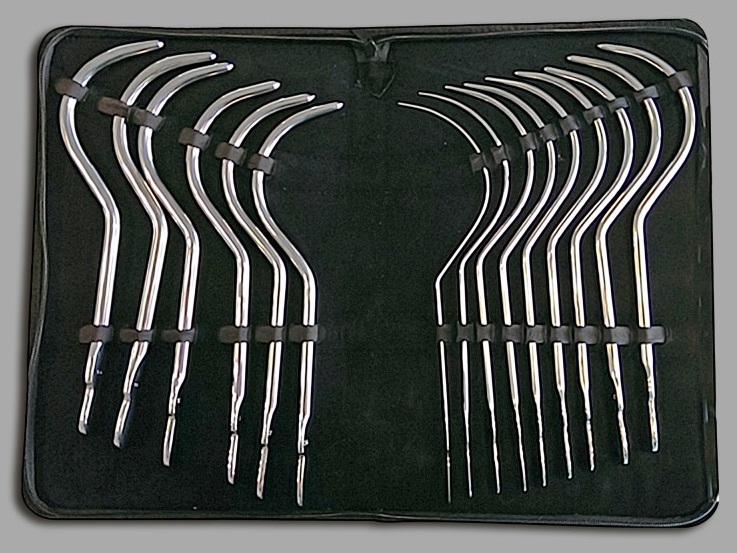 A set of curved Sounds

End of the Day

After all of this, I did teach Marica how to clean sex toys properly and she watched, cleaned along beside me until I was sure she was doing it correctly, then left her to it. I randomly walked into the kitchen and clandestinely looked to make sure she was being careful and meticulous with cleaning. She never wavered her attention. I was proud of her.

A long day, but we surely had some fun.

Next week, all about Chastity and Chastity Cages!