Rope Bondage with Ms. Lilly (She Bound ME!)

This is from April 2016, but it needed to be repeated!

A few weeks ago, Mistress Lilly told me she was flying into Florida for a meeting of some kind or other soon. Where she was going was hours from me, but after our visit together last fall, I couldn’t miss the opportunity to see her again. I had some friends near where she was headed and they just happened to be having a Play Party that night. Woo hoo!

We shared emails and phone calls as well as talking during down times at work, getting things in order for our few hours together. It was delightful just talking about it! Most of you know I spent many years as a lifestyle submissive, being released when my former partner and I split 18 months ago. I vowed then to never submit to anyone again, but stepped quite purposefully and assuredly into my role as a Domme.

However, when Ms. Lilly and I were talking, it took no time at all to volunteer to bottom to her. Considering she does not bottom, it really was a default situation.

We choreographed the Scene as much as one can do from afar, but both of us were quite ready for our evening with the ropes.

In two humongous warehouses, dozens of folks participated in various Scenes. We wandered through, Ms. Lilly dressed exquisitely in a black leather and steel corset with (terrifying!) spiked metal studs… that, quite literally, spilled her awesome breasts out the top. She also wore a pair of black mesh boy-short panties that had a floral lace overlay… in exactly the right places. She had these fucking awesome wet-look PVC thigh-high tights that were the mere backdrop to her antique metallic silver-tone spiked stiletto heels. I can hear them clickity-clacking even now as she did her Scene with me.

What I wore was irrelevant because within five minutes inside the dungeon, I was stripped naked, my thigh-high stockings and heels, the only things left on. Most of the bottoms and subbies inside were in various states of undress… most quite naked like I was.

Coincidentally, it seemed to be a night of several Rope Scenes, many of them suspension. I am always so fascinated with suspensions… not something I ever aspired to. 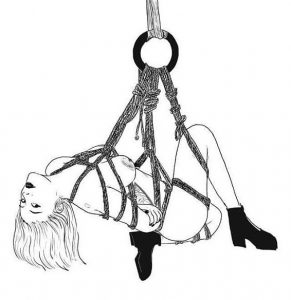 Finding Our Place for Rope Bondage

As we ambled around the room, circumventing the various Scenes, I found myself reaching out for Ms. Lilly’s hand. Without hesitation, she wrapped her fingers around mine. I edged a little closer to her and felt more comfortable instantly.

We found a nice niche over to the side that hadn’t been claimed yet so we dropped the ropes both of us were carrying down onto a tarp.

Respect the tools and they will last many, many years. 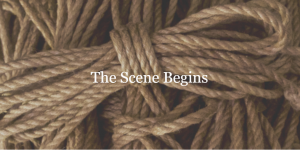 As I sat waiting patiently, I felt Ms. Lilly beside me.

“Raise your arm,” she commanded.

I did as I was told and within moments, began to feel the rope wind its way around my flesh.

I was surprised at how easily I was able to give up control to her, but acknowledged that months of sharing emails, phone calls, 2-Mistress calls and texts had brought me to a place of acceptance of being able to bottom to her.

The more she wound the bonds around my wrist and arms, the more I felt myself walking into the ocean of bliss.

And we had just begun.

Over the next ninety minutes (although time vanished for me), I became a canvas for Ms. Lilly to decorate. She created a work of art that incorporated not only my body, but my mind as well. Gently and lovingly, she wrapped me tighter and tighter, swirled the loops and knots from breasts to chest to waist and then down my arms.

If you haven’t spoken with Ms. Lilly, you don’t know she has an angel’s voice. I have heard her sing and it is a gift from the heavens, her incredible gift of song. Throughout the Scene, she would speak softly into my ear, asking if I was doing well… was this knot too tight? Do you need anything? I quickly became non-verbal, but was able to answer with nods and shakes of the head. She never let me dangle out there alone.

I swayed with the feelings of being embraced… held rigidly within the bonds of… friendship? Mistress-hood? It seemed, at least for the Scene, more than that. I hesitate to use the word “love,” but it was close to that.

I remember, near the end of the Scene (that I called), looking into Ms. Lilly’s eyes and found myself falling into a submissive place… subspace. And I got scared. I called the Scene and she immediately honored my wish… kneeling down in front of me, checking in to make sure I was okay… and asked if she could begin removing the ropes… if I was ready or not. I nodded, unable to speak anymore than “Please stop” when I did.

And just as I had been spun into her web an hour and a half earlier, sweet, lovely Ms. Lilly began unwinding the bonds that held me. It didn’t take long, but she was gentle and meticulous, checking in every few moments to make sure I was still okay. I cannot say how much I appreciated her for that loving care. 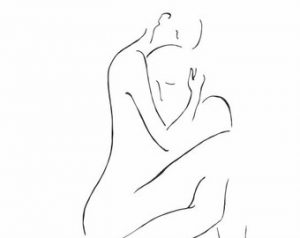 After our Scene, we sat close on a comfy couch, replaying our feelings throughout the experience, my coming back up slowly, but easily.

Before we left, we watched a couple of other Scenes that interested us. One in particular. A very large, gorgeous woman in a wheelchair was being bound by her blind Domme. It was mesmerizing seeing how they worked together. I hope to write their story soon.

I barely remember getting dressed to leave, but we found our way back onto the road to take Ms. Lilly back to her hotel where she would leave on the first flight out to Texas the next morning. I drove the several hours home in a state of hyper-awareness and… yes, bliss.

That sense of joyous satisfaction still cradles me all these weeks later.

Note to Mistress Lilly: I cannot thank you enough for your gift of time and your rope bondage skills with me. I would be honored to bottom to you again, anytime. Your friend, Daphne